Endurance can be defined as the ability to continue to endure a stress, hardship or level of suffering.

In the context of sport, endurance is the ability to sustain a specific activity (endurance running, cycling, swimming, rowing, cross country skiing etc) for a prolonged period of time.

What is an endurance sport?

An endurance sport is any sport in which there is a requirement to sustain an activity level whilst enduring a level of physical stress.

The main requirement for any endurance sport is the ability to sustain a high work rate for a prolonged period of time.

Whilst this is strongly influenced by physiological factors (efficiency of energy systems, aerobic capacity/VO2 max, lactate threshold, muscle strength, power and muscular endurance), psychology also plays a key part in success in endurance sport. As such, the ability to compete successfully in endurance events is affected by both our physiological fitness and our psychology.

Endurance training involves developing both general and event specific endurance. It also helps us to develop the mental toughness or “grit” needed to be able to achieve our peak performance.

The primary factor that limits endurance performance is fatigue. As fatigue builds up to a certain point an athlete’s work rate will begin to decrease. The actual point where fatigue limits performance (tolerance level) varies from one athlete to another. Some athletes are known to tolerate much higher levels of fatigue than others.

Whilst genetics and mental toughness contribute to our ability to tolerate fatigue. This is also highly trainable.

A key effect of endurance training is being able to resist fatigue. As such an athlete with a strong base of endurance will fatigue less easily, and will be able to outwork other less well-trained athletes. 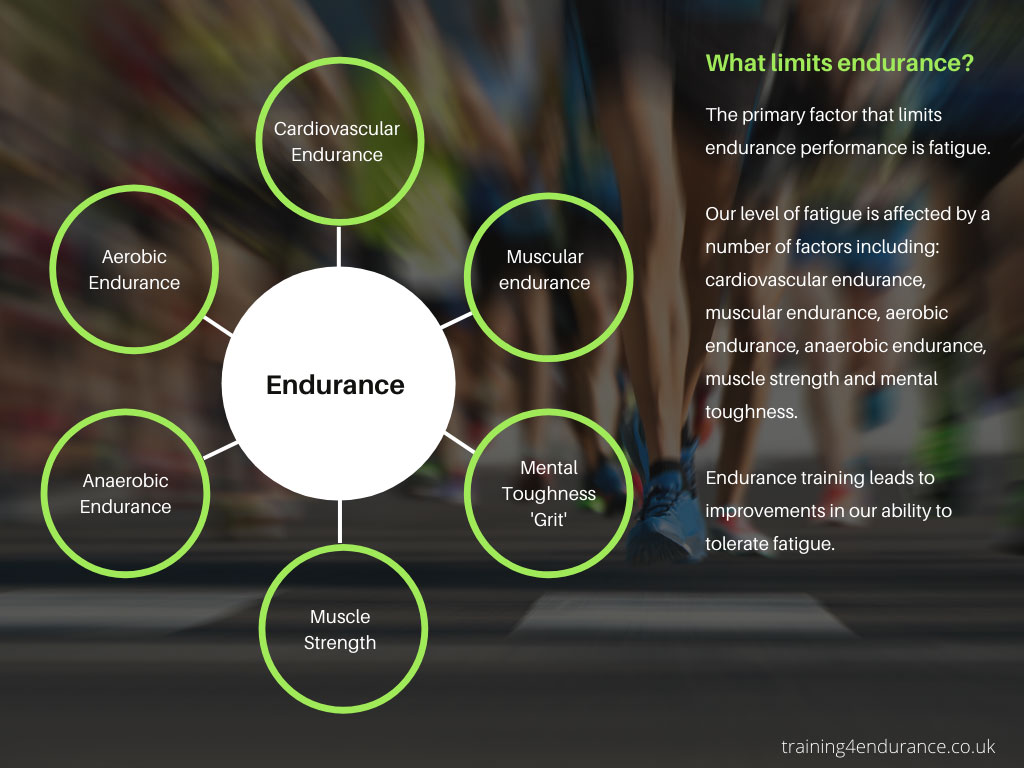 Cardiovascular endurance refers to the ability of our lungs, heart, and circulatory system to transport oxygen during prolonged exercise.

The overall efficiency of the cardiovascular system is affected by a number of factors:

Muscular endurance is the ability of a muscle or a group of muscles to repeatedly exert a force for an extended period of time. As such, an athlete with good muscular endurance will be able to repeat a series of muscular contractions without fatiguing.

The greater the level of muscular endurance the more force the muscle can exert over time. Muscular endurance is affected by the percentage of different muscle fiber types (fast and slow twitch).

Muscular endurance can be improved through specific training that leads to improvements in the fatigue resistance of both slow and fast twitch muscle fibers. Part of the way training improves muscular endurance is through adaptations to the aerobic and anaerobic energy systems. Another factor is improved delivery of oxygen to the working muscles. And we also see increased muscle fiber recruitment, which effectively reduces the workload on individual muscle fibers.

Your muscle cells produce energy through both aerobic (requiring oxygen) and anaerobic (not requiring oxygen) metabolism. During endurance sports the majority of your energy needs are met through aerobic metabolism. However, as exercise intensity increases, aerobic metabolism is unable to meet all the cells energy requirements. This leads to a shortfall. To make up for this shortfall anaerobic metabolism has to increase proportionally, to the cells energy needs. The major factor here is increased recruitment of type II (fast twitch) muscle fibers at higher intensities.

It’s important to note that the contribution of aerobic and anaerobic systems can vary between individuals, and is affected by gender, age, genetics and the performance level of the individual.

The contribution of aerobic and anaerobic energy system during 800m to 10,000m running. 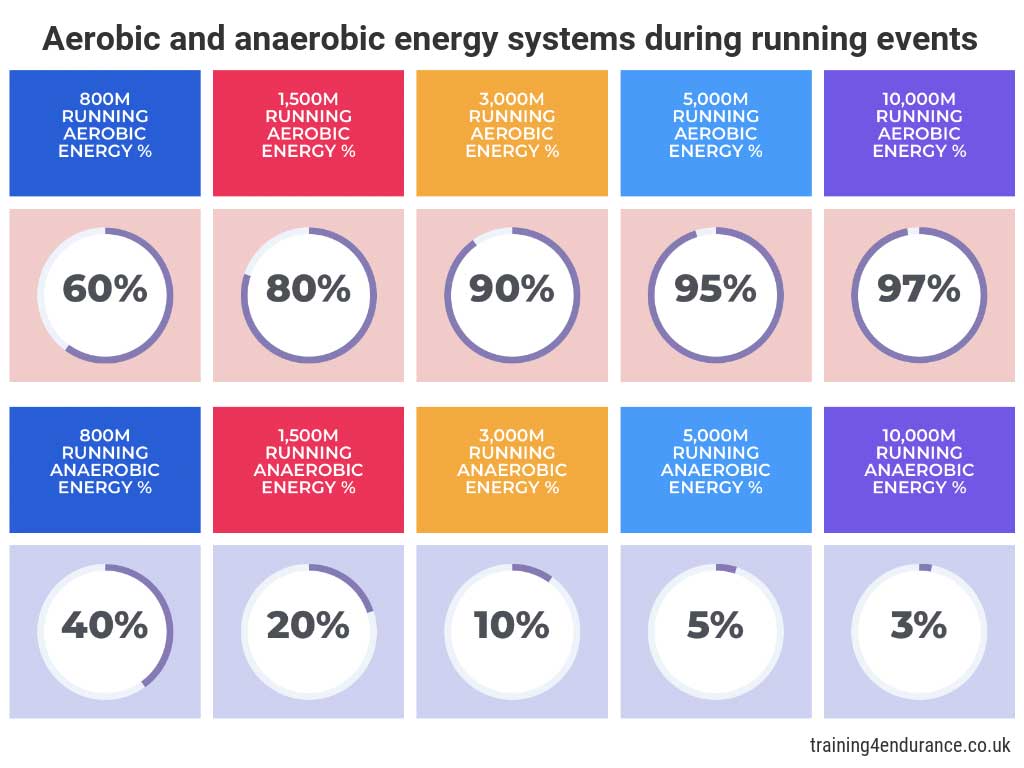 As you can see, the aerobic energy systems provide the majority of energy during events lasting more than a couple of minutes. As such, endurance athletes should focus primarily on development of aerobic endurance.

Aerobic endurance refers to our ability to produce energy using aerobic metabolism. Not surprisingly, the limiting factor here is our ability to absorb, transport and use oxygen for energy production.

This can be broken down into four parts:

Some of the improvements seen with aerobic endurance training include:

At high exercise intensities, aerobic metabolism cannot produce enough energy to meet all of the demands of the working muscles. The main reason for the limitation of the aerobic system at high intensities is the ability to deliver enough oxygen to the working muscles and the fatigue resistance of your muscle fibres.

Although anaerobic metabolism can supply energy at much faster rates than aerobic energy, there is a trade-off.

Firstly, it leads to a build-up of hydrogen ions, which increase muscle acidity and can interfere with exercise performance.

Secondly, it rapidly depletes the key stores of muscle glycogen.

Some of the improvements seen through anaerobic endurance training include:

Examples of ways to develop anaerobic endurance include:

*These sessions are effective for the development of both aerobic and anaerobic metabolism.

Muscle strength is our ability to exert force during a single maximal effort. It differs from muscular power in that it is not time dependent – power relates to force exerted over a given time, whereas muscular strength relates to the maximum force you can exert.

Whilst having good muscular strength may not seem important for endurance athletes it plays a key role. The main reason for this is that an athlete with greater strength will find it easier to work at the lower intensities required during endurance sport. The key is to develop strength without significantly affecting bodyweight.

Mental toughness – often referred to as ‘grit’ – is another key area that influences endurance performance. Endurance athletes need the ability to be able resist the sensation of fatigue that call out to us slow down during endurance events.

Mental toughness is developed over time, through exposure to fatigue during training sessions. You’ve probably heard the phrase “get comfortable with being uncomfortable”. Well, this really is a key factor with endurance sport. But more importantly, we need to get comfortable with the intensity, or fatigue level, that we will encounter during competition.

What does this mean?…Put simply, fatigue is specific to the event you’re competing in.

This brings us on to the importance of specificity and the difference between general and event specific endurance.

Event specific endurance relates to the development of the specific endurance requirements for the athlete’s chosen event. As an example, both an 800m runner and 10k runner will have similar levels of general endurance. However, the 800m race requires a different training emphasis compared with a 10k runner. As such the 800m runners event specific training will be different compared with 10k running training.