vVO2max - The Velocity at VO2max 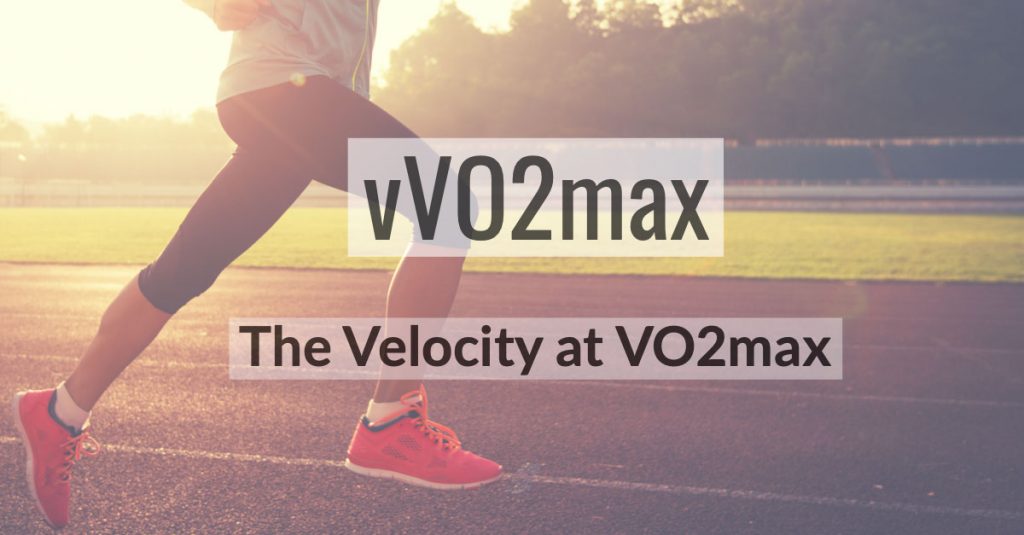 The Velocity at VO2max (vVO2max) is the velocity, at which the maximal oxygen uptake or VO2max occurs. It’s been shown to be strongly linked to success across a range of endurance running events and is often used as key training intensity.

Importantly, the velocity at VO2max can be improved through specific training.

In this article we’ll take a look at the vVO2max and how it affects endurance running performance. Look at how to find your velocity at VO2max. See what research tell us about improving vVO2max. And look a some sessions to target your vVO2max.

Whilst the scientific definition of vVO2max relates to velocity (m/s) associated with VO2max, from a practical standpoint vVO2max can be related to speed, or, running pace.

In the example below, you can see how oxygen consumption increases linearly and then starts to plateau. For this athlete we can see that oxygen uptake is near maximum at 20km/h and doesn’t increase significantly, even when running speed is increased to 21.5km/h. So why doesn’t oxygen uptake increase beyond the vVO2max? At this point your heart, lungs and muscles have reached their upper limits for oxygen absorption (lungs), oxygen transport (heart and circulatory system), and oxygen uptake and use within aerobic metabolism in the working muscles.

Whilst, you can still run at faster speeds, the additional energy needs must now be met through anaerobic metabolism.

In this way the the velocity at VO2max is the minimum running velocity that elicits VO2max. And, represents the VO2max running speed where there is the lowest total anaerobic contribution.

Typically the anaerobic energy contribution at vVO2max would be between 10 and 20% for a well trained runner. Training at the minimum velocity of VO2max, allows athletes to maximise the aerobic training benefit whilst minimising the anaerobic component.

It’s considered a key training intensity by many athletes and coaches as its the minimum velocity that allows you to place the greatest stress on the aerobic energy.

The vVO2max is also considered a key predictor of endurance running performance. And, explains differences in performance between two athletes with the same VO2max values. This is because unlike with VO2max, the vVO2max relates to both aerobic capacity and running efficiency.

The vVO2max has been shown to be highly predictive of endurance running performance. It can be used to provide useful information for athletes competing over middle to long distance running events (McLaughlin et al., 2010; Billat et al., 2003; Billat and Koralsztein 1996; Noakes et al., 1990; Morgan et al., 1989;).

When researchers looked at the physiological characteristics of a group of male and female Kenyan distance runners they found the vVO2max was the best predictor of 10km running performance (McLaughlin et al., 2010). In fact, it’s considered one of the best predictors of endurance running performance because it integrates both aerobic capacity (VO2max) and running efficiency (McLaughlin et al., 2010; Morgan et al., 1989).

In this way, the velocity at VO2max can be used to explain the differences in running performance, between two athletes of equal VO2max, or equal running economy.

If two athletes have the same VO2max values or have a similar running efficiency, then the athlete with the highest vVO2max will be running at a greater velocity for any given percentage of their VO2max. As long as there was no decrease in the sustainable %VO2max, or lactate threshold, then any improvement in vVO2max should directly transfer to improved running speed and performance over a range of race distances.

The example below highlights how both VO2max and running efficiency impact vVO2max. Here, both athletes have a similar velocity at VO2max despite Athlete A being more efficient and the Athlete B having a higher VO2max. The vVO2max can be determined through either laboratory based incremental running exercise test performed on a treadmill, or assessed using field based tests. Unlike many other tests (like VO2max and lactate threshold tests), the velocity at VO2max can be assessed to a high degree of accuracy using a simple field based test.

In fact using a field test to assess the vVO2max is probably more directly transferable to training situations.

At a certain running speed we start to see a plateau in this increase in oxygen uptake and oxygen uptake will not increase further. The velocity where we first see maximum oxygen consumption is said to be the velocity at VO2max.

The exact running speed where VO2max occurs is not always easy to identify during incremental exercise. There are also questions as to how well this transfers to running outdoors. As such field based tests are commonly used to establish vVO2max.

The most simple field test for estimating the velocity at VO2max is to perform a 6 minute time trial in which the average speed sustained over the time trial gives an estimation of vVO2max.

If you’re like me, then the thought of completing a 6 minute all out running time trial during training really isn’t appealing.

It’s often difficult to replicate this kind of effort in a non competitive situation. An alternative, is to use a recent race performance, or an estimation of your current running level to estimate your vVO2max.

Here we’re looking for a running speed that you could sustain for around 6-9minutes in a race situation. Some athletes use a specific race distance such as 3km race performance to determine their vVO2max. Whilst this works for some runners, this is not effective for all. There is a large element in individuality here and you will need to adjust this.

If we consider an athlete that can run 3km in 8minutes and another who can run 3km in 15minutes, then the intensity at 3km pace will be very different for each athlete. In the case of the first athlete the velocity at VO2max would be pretty close to their 3km running speed, whereas with the second example it would likely be closer to their 1500m or mile running speed.

What research tell us about improving vVO2max

Researchers believe that the best method to improve the vVO2max is through high intensity interval training run at the vVO2max running speed.

One of the most popular approaches involves running 5 x 3minute (or equivalent distance e.g. 5 x 800m or 5 x1000m) intervals at vVO2max, with 3 minute active recoveries. This is based on research that found that the use of these intervals, along with tempo training and easy pace training, led to a 3% increase in vVO2max and a 6% improvement in running economy after four weeks of training (Billat et al., 1999).

Some research suggests that 3 minute intervals at vVO2max speed may not be sufficient to attain VO2max (Hill et al., 1997; Hill and Rowell, 1997). Further research suggests that the use of repeated shorter 30s intervals (30s) at vVO2max with 30s recoveries at 50% vVO2max may be a more effective means of increasing the overall time spent at VO2max (Billat et al., 2000).

However, the real benefits from this type of training are less likely to come from the actual time spent running at VO2max. Especially, when we consider that VO2max is unlikely to show significant improvement in well trained runners.

This has led to some coaches questioning the usefulness of training at this intensity. However, training at the vVO2max is not specifically about increasing VO2max, but rather it places the greatest training stress on the physiological factors that contribute to top end aerobic fitness and performance – the ability of the lungs to efficiently inhale and absorb oxygen, the ability of the heart and circulatory system to transport oxygen, and the ability of the muscles to work at high intensities for sustained periods of time.

In reality, the training benefits are more likely to come from a combination of improved neuromuscular co-ordination – which we know is key to improved running efficiency, increased cardiac output and stroke volume, increased muscle capillarization and hypertrophy of slow twitch muscle fibres.

In addition to this we know that the velocity at VO2max is strongly linked to endurance running performance. We also know that unlike with the VO2max, well trained athletes can achieve improvements in the vVO2max following specific running interval training. Therefore, why wouldn’t we look to include some training at this intensity?

Below are some examples of vVO2max interval sessions.

The main problem here is that the short duration of the intervals makes controlling intensity difficult.

An alternative involves running these by distance rather than time:

Repeated longer intervals at vVO2max. Again these can either be run by time or distance:

Ensure you have completed adequate base training and have good experience of interval training before completing any intervals at this intensity. Always Include an appropriate warm up before these sessions, including low intensity warm up followed by dynamic mobility and activation exercises, drills, and accelerations.

We know that the velocity at VO2max is influenced by both running economy and aerobic capacity. As such, any training that improves one of these factors should result in an improvement in your vVO2max. Therefore, in addition to running intervals at vVO2max you should utilize the methods discussed in the VO2max and exercise economy sections (e.g. adequate training volume, optimizing training intensity, strength/resistance training for endurance), and also ensure you include intervals run at intensities above vVO2max.